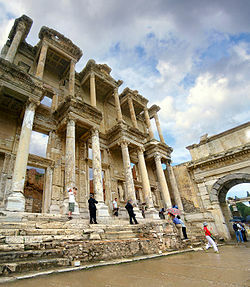 As I walked around the holy grounds of Ephesus I felt excited. I had been there over twenty years before on my first trip overseas and certainly didn’t remember feeling like that then. I had arrived via a cruise ship that started in Greece and stopped in Egypt and Israel beforehand. I had already been to the Parthenon, the Pyramids, Bethlehem and Nazareth. By the time I got to Ephesus my psyche was overloaded and my circuits were ready to crash. I never really gave Ephesus her due.

This time was different. I had been steeped in Turkey this whole trip and had had ample opportunity to absorb the culture, so when we arrived in Ephesus I had a much richer experience. I felt a wonderful sense of well being, of being home, of walking down streets I might have visited centuries before. My heart was content and my sandals bridged time as they hugged the earth in both worlds. I quieted my mind and was just attentive to everything my eyes focused on. There was so much to see, a library, gymnasium, theatre, fountain, public washrooms, bath houses, a shopping area, altars to the gods, a house of pleasure, homes of the rich and famous and just about everything else you could possibly need in a community. I said a prayer at Isis’s temple, watched a Roman enactment of a battle and walked under the arches of the Temple of Hadrian. There, I stopped for a moment to look at the carving of Medusa overhead. I gave her a nod of respect and silently thanked her for having protected me all these years.

When we got to the Library of Celsus tears came to my eyes. There was enough of the original building standing to really get a sense of how grand it must have been. The whole front side of the building was there, two stories high. It could have been a Hollywood set, except this structure was made up of a number of columns in the Corinthian style. There were eight in total, and there were four arches one spanning the first and second column, one the third and fourth, one the fifth and sixth and finally one the seventh and eighth. Between each set of columns, were niches, and within them, deeper in the background, were female statues, one in each, replicas of the ones in a museum. They were named Wisdom (Sophia), Knowledge (Episteme) Intelligence (Ennoia) and Valour (Arete). These were named for the virtues that the library stood for. How noble, I thought. I imagined how much pleasure people would have experienced spending time in that library; in the same way we do today. The outer trappings of libraries may have changed over the centuries but not the heart of them. The human spirit still holds the same noble values today as it did then and reflecting on that felt good.

When we left there, we stopped off for lunch and as always that was a delight. We never knew where we would end up for our afternoon meal. Our guide just seemed to have a good nose for discovering rare finds. We teased him about his spot-on intuition. On one occasion we had veered off the beaten path to a monastery that wasn’t on our itinerary but that someone had mentioned was worth visiting and it was. There was a courtyard in the centre and rooms surrounding it, old stone staircases and hidden niches. We walked all through it, noticing a bit of paint still visible here and there where frescos had once adorned the walls. We were very grateful for the opportunity to visit this site and when we were finally ready to leave, we were famished.

Our guide scouted out a small grocery store/café nearby and we decided to give it a try. We ended up having the best pizza ever. It was simple but there was something about it that made it special. Maybe it was the fresh tomatoes ripened under the Mediterranean sun that he used, or the fresh cheese made locally or the fresh dough made earlier that morning from scratch, or just the pride the man had in making each pizza with care, maybe all of those things. That pizza was unforgettable. It was just one more unexpected pleasure that stuck in my mind and as we left the ruins of Ephesus heading for lunch today, I was looking forward to whatever new spot our guide had lined up. It was a sunny day so there was a good chance we would be outside under a canopy and we were. 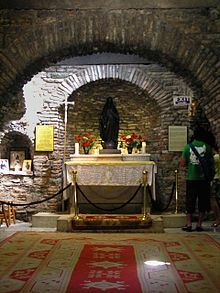 Later we made our way to Mother Mary’s home close by where it is said she spent the last years of her life.  The experience there pleasantly surprised me.  My mother had never been mothered and so she had no idea how to do it. As a result I had no link to the mother principle. Connecting to Mary wasn’t something I expected to do. When I had issues, I would just turn to Athena, or Hera, or Vesta, or Aphrodite, depending on what was happening.  I didn’t know if the Virgin Mary would get me.  Yet, when I entered the little chapel, and was surrounded by women filled with devotion and love looking at pictures of Our Lady, something within me stirred. It might have simply been the caring and love built up in the chapel over the years from all the people who entered there, I’m not sure.   I do know there was a grace in that chapel and I was touched by something.

Mary didn’t come to this area alone. It is said that St. John brought her here after Christ’s death.  St. John also lived and died nearby and we visited his site as well.  St. John’s Basilica was built in the shape of a cross.  It had six domes and under one of them, the main one, it is said, lies his tomb.  The foundation and parts of the walls have been reconstructed and the site just had a feeling of expansiveness about it.  It was huge.  I don’t know if it was the sunny day or the feeling from the morning of Ephesus spilling over, or being in Mary’s chapel but as we walked around I felt light and open and curious.  I wondered about St. John.  I had no clue who he was and had no connection to the apostles.  They were simply names in the Bible.  But being there, on the grounds of his Basilica changed that a little.  Maybe it was because I could picture the kind of young man who would have taken care of the mother of his Teacher.  Christ must have seen something in his make up that prompted Him to ask John rather than anyone else to look after his mother.  As I thought on this I found myself starting to cotton to John and I really liked the legend that said that he wasn’t really dead, that he was sleeping and when he breathed, sand above his grave would move.  It was kind of cool.

All in all it was a very memorable day and as the sun set I felt that on a very subtle level something within me had shifted.  For the first time Mary seemed more real to me.  I thought about how hard it must have been for her to watch Jesus go through so much pain and not be able to do anything about it.  I had never thought of her as having a strong personality but she must have had, that and tremendous fortitude to live through what she did, to be with Him through every painful moment right to the end.  She was someone I think I would have liked to have known.   And as for St. John, he was no longer just some figure in the Bible.  He had meat and bones now.