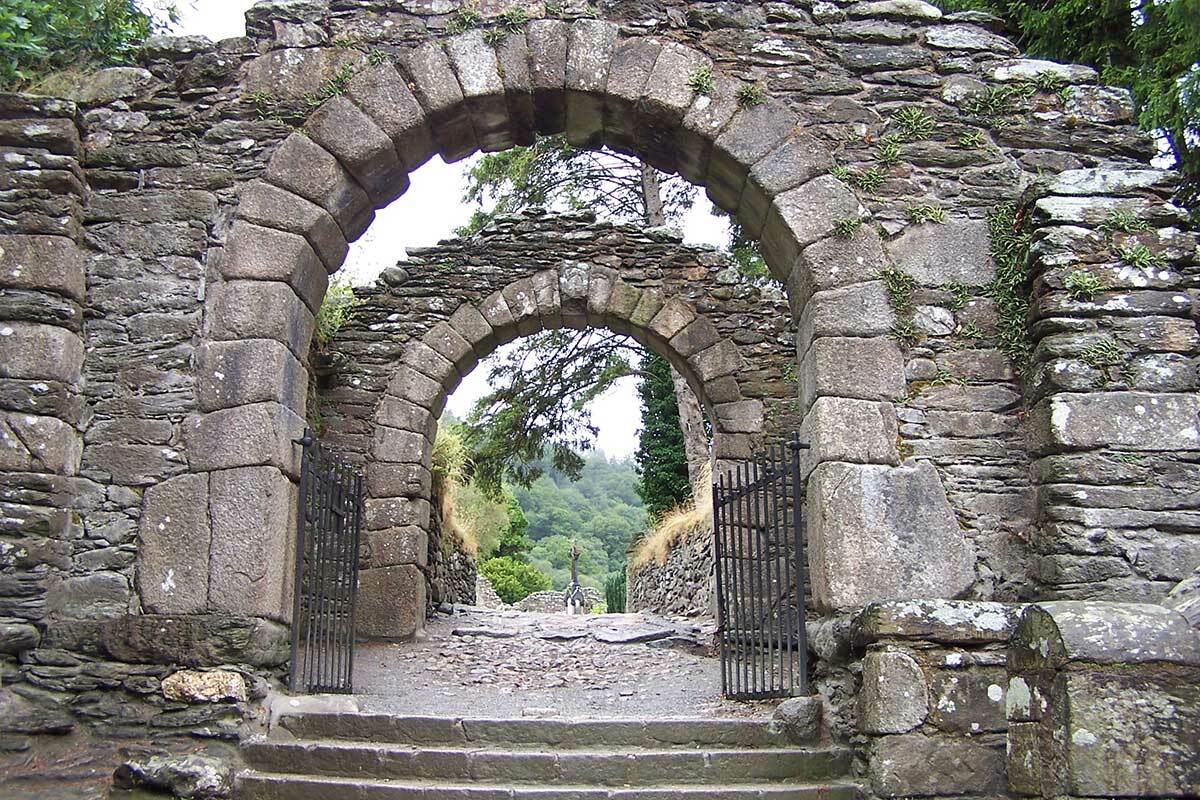 Glendalough is one of the most important monastic sites in Ireland. Located in a beautiful glacial valley, Glendalough is known as an early Medieval monastic settlement founded by St. Kevin in the 6th century. Despite numerous viking raids and events of upheaval, Glendalough flourished, and by the 9th century it was known as a leading monastic city of Ireland. Many of the surviving building of this time date back to the 10th – 12th centuries.

Glen of the Two Lakes

Glendalough is one of the top attractions on Ireland’s east side.  Glendalough, meaning “Glen of the Two Lakes”, comes from the Irish “Gleann da locha.” This fascinating place contains vast monastic ruins and the stunning natural beauty of the lakes located in a glacial valley, amid the gorgeous Wicklow Mountains. Glendalough is a favorite place amongst many who travel the majestic and sacred sites of Ireland. The two lakes of Glendalough are known as the Lower Lake and the Upper Lake. Most of the monastic ruins can be found  on the east end of the site, near the Lower Lake. There are beautiful walking trails that connect the ruins and the lakes. The many fantastic walking trails range from casual strolls around the sites to more demanding hikes up the mountain. Many people report feelings of joy, love, and peace as they traverse the many paths through this ancient monastery.

There is a feeling of delight and discovery as you pass through the arches of the gateway. Glendalough’s iconic gateway is Ireland’s only surviving Medieval gateway to an early monastic city. There is truly nothing else like it. The arches were built with roman style columns; the stones were cut specifically to size and held together without the use of mortar. The Gateway was originally two stories tall, and protruding walls at each end indicate that it was once topped with a timber roof. This is most likely where the Gatekeeper lived. There are very few stones remaining from the original enclosure walls.

The Cathedral at Glendalough

The largest building at Glendalough is the Cathedral. The Cathedral was built in phases that spanned three centuries. Large mica stones pulled from an earlier church were used to form the foundation, and smaller stones were used to build the walls. Inside the Cathedral is a wall cupboard and a piscine, several grave slabs, and the remains of a once finely decorated arch. Although many stones are now missing, the Glendalough Cathedral is a beautiful marvel to see. Nearby is a small Romanesque building known as the Priests House which has been mostly recreated based on a sketch of the original structure. Some people believe this structured may have once contained relics of St. Kevin.

Just south of the Cathedral is St. Kevin’s Cross. This monument was remarkably carved from a single piece of granite stone. Local legend says that any person who can wrap their arms entirely around the body of the cross and touch their fingertips will have their wishes granted. St. Kevin’s Cross may have been used to mark the boundary of the Glendalough cemetery. The cross combines Christian and Pagan symbolism and is a great representation of St. Kevin’s attempts to help pagan people adjust to new Christian influences.

To the east of the Upper Lake is a large stone enclosure known as the Caher. The exact purpose for this stone structure is unknown, but most people agree that the thick stone walls were used as protection from the outside elements, much like the stone walls that surrounds the monastic city of Glendalough. The stone enclosure is 20 meters in diameter, and many scholars describe this structure as remnants from early occupancy of the valley.

There are many more sacred sites to see in Glendalough. As we explore this exceptional place, we will relish in the calmness and natural beauty of this ancient Celtic spiritual power site. Here we will find the perfect balance of the masculine and feminine within each of us, and connect with the beauty of the heart.

In this is a place of sacred balance and awareness we will encounter Trinity Church, Saint Mary’s Church, Reffert Church, the main complex, the Green Road, lakes, streams and Saint Kevin’s Cell, St. Kevin’s Well and much, much more.

During our stay in Glendalough we will have some time for a group ceremony and individual and group meditations, reflections, and integration, as well as talks and discussions about the energies of Awakened Consciousness in 2017.

We will also experience a night of traditional Celtic song and dance.

Join us in Glendalough and experience all of the magic and spirit of this ancient Celtic power site. The little people are sure to enchant our hearts as we journey the sacred sites of Glendalough.