The Temples at Abu Simbel

The Temples at Abu Simbel 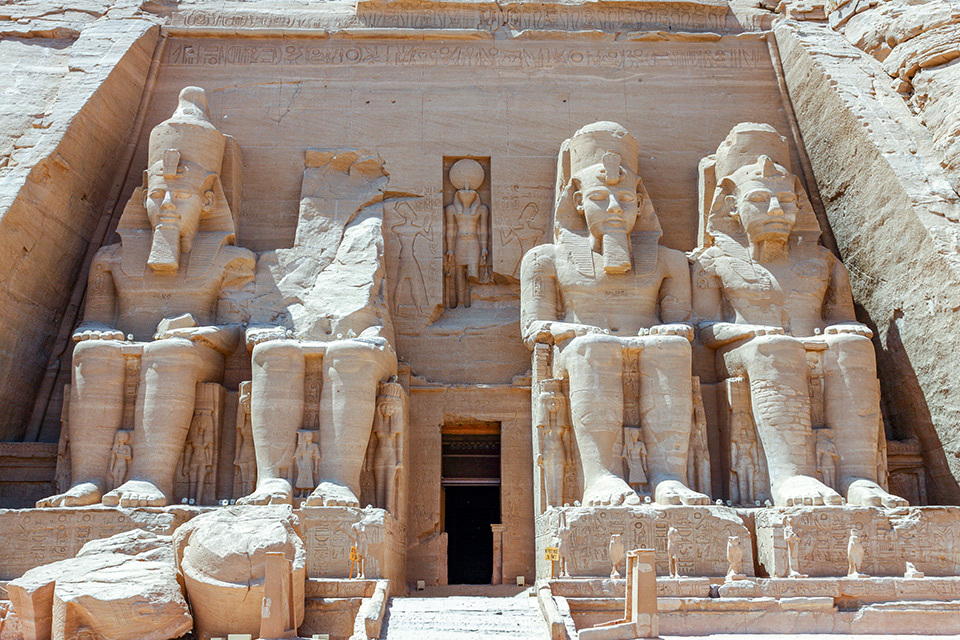 The Great Temple of Ramses II

Join us on a Sacred Tour of Egypt as we explore the incredible temples at Abu Simbel. Abu Simbel, a UNESCO World Heritage site, is a temple complex in southern Egypt that contains two temples built by the Egyptian king Ramses II. As one of the few ancient Egyptian sites that largely escaped damage by past invaders, the interiors of Abu Simbel’s temples are astounding. The main temple, known as the Great Temple, is dedicated to the gods Amun, Ra Horakhty, and Ptah, as well as to Ramses himself. The second and smaller of the two temples was built in dedication to his beloved Queen Nefertari.

The archeological site of Abu Simbel is easily one of the most recognizable ancient sites in Egypt. For 3,000 years, it sat on the West Bank of the Nile River, but due to the threat of inevitable flooding by rising Nile water levels, the entire temple complex was disassembled and relocated to a higher elevation in the 1960s through a remarkable feat of engineering.

The single entrance to the temple complex is flanked by four giant statues, each representing king Ramses II seated on a throne, wearing the double crown of Upper and Lower Egypt. Next to the legs of the four Ramses statues are many smaller statues carved in the likeness of his wife Nefertari, his mother Tuya, and eight of his children. The facade of the entrance is carved with bas-relief images of Ramses worshipping the falcon-headed Ra Horakhty holding a hieroglyph and a feather in his right hand, and Maat, the goddess of justice and truth, in his left hand, completing a cryptogram for the name of Ramses’s throne.

The temple interior is designed with the typical triangular layout of most Egyptian temples, with rooms decreasing in size as one gets closer to the sanctuary; however, the Great Temple is unique in this regard. The layout of the temple is unusual because of its many side chambers and complex structure.

It is believed that the Great Temple was aligned to the sun so that the sun’s rays would illuminate several sculptures along the back wall on October 22nd, and again on February 22nd – the Pharaoh’s birthday and coronation day.

The Temple of Nefertari at Abu Simbel

The second temple, known as the Small Temple, is dedicated to the goddess Hathor personified by Queen Nefertari. At the time of the temple’s construction, this was only the second time in all of ancient Egyptian history that a temple was dedicated to a queen (the first being Pharaoh Akhenaten’s temple dedicated to his wife, Nefertiti).

The temples at Abu Simbel are magnificent examples of ancient Egyptian art and draw nearly as many visitors annually as the Pyramids of Giza. Join us in experiencing this ancient wonder set against the spectacular landscape of Egypt as we explore this sacred land together on a mystical spiritual adventure into the heart and spirit of Ancient Egypt.