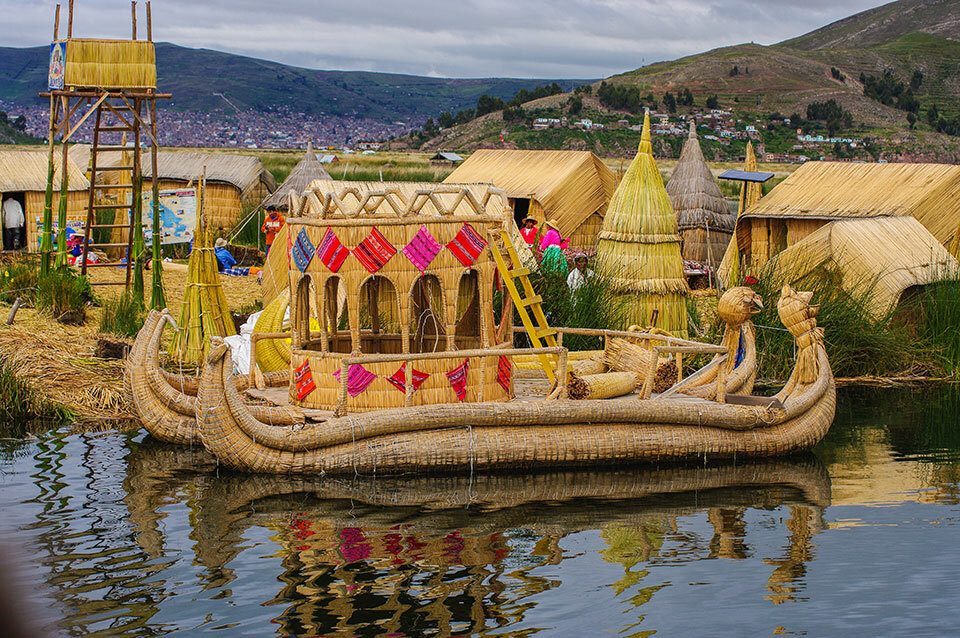 Renowned as the world’s highest navigable lake, Lake Titicaca sits at 12,506 ft. in elevation. It is also the largest alpine lake, at 3,200 sq. miles, and the second deepest mountain lake, reaching up to 1,000 ft. deep. But Lake Titicaca is not only impressive for its geographic stats: it’s also a lake of deep spiritual importance.

Birthplace of the Sun

According to Andean myth, the entire world was once flooded by heavy storms, and thrown into cold and darkness. The Inca creator god Viracocha then rose up from the center of the flooded world, at Isla del Sol (Sun Island). There, Viracocha created the great Sun god (Inti), Moon goddess (Mama Killa), and stars. Inti and Mama Killa then gave birth to the first human beings, Mano Cápac and Mama Uqllu. It is said that these “Adam and Eve” figures traveled from Lake Titicaca to Machu Picchu. At Machu Picchu, they founded the first Inca dynasty and repopulated the earth. The Inca kings were considered by their people to be “Sons of the Sun.”

The Floating Islands of Uros

There are another native people who call themselves “Sons of the Sun.” The Uros of Peru and Bolivia are an indigenous group who live on Lake Titicaca. They are known for making islands (and boats) out of local totora reeds. These islands were originally defensive, and could be moved if needed. Eventually they were captured and enslaved by the Inca. But today they live on their islands, adding new top layers of reed as the under layers decompose in the water. The islands can’t support livestock or other commonly domesticated animals. Instead, the resourceful Uros use local birds to help supply food: cormorants catch their fish, and ibises provide eggs.

Animal life at Lake Titicaca has long been significant, not only as a direct source of food, but also for spiritual connection and provision from the gods. The Inca, Tiahuanaco, and other native pre-Columbian peoples of Lake Titicaca venerated Mama Pacha, the goddess of earth and time, embodied in the majestic mountains surrounding this sacred body of water. Archeological findings on the summits of several peaks throughout the region of Peru and Bolivia suggest that these ancient peoples regularly climbed to 18,000 ft. to carry out religious ceremonies asking for rain. These peaks are guarded by the sacred great condors, messengers of the mountain spirits, who communicate with the shamans.

Shamans are also known to connect with the puma spirit by shape-shifting. The word Titicaca translates to “Rock Puma,” and locals claim that, from an aerial view, the lake looks like a puma hunting a rabbit. More than 180 ruins and monuments remain in the area surrounding Lake Titicaca. Many of these megalithic ruins also depict the venerated puma.

How did ancient Andean peoples build these megalithic monuments? The ancient site of nearby Tiahuanaco contains blocks weighing up to 65 tons. These were sourced from two different quarries, 10 and 50 miles away. The monuments are truly remarkable considering that pre-Columbian civilizations at Lake Titicaca lacked the aid of wheels or beasts of labor for transportation of materials. Additionally, they lacked iron and steel for shaping stone, and had no writing system for planning and communication. And yet the Tiahuanaco — and the Inca after them — undeniably built some of the most incredible structures in the history of mankind.

Like the Egyptians, the Tiahuanaco and the Inca possessed mind-boggling masonry skills. Scientists today have theories about how this dry-stone construction was done using drills, wooden wedges, and the freeze-thaw cycles natural to Lake Titicaca’s mountain climate. But these explanations don’t account for the smoothness and exactitude of the rocks’ cut edges.

Their masterful architectural works were created by cutting stone precisely, and wedging them together so closely that a credit card could not fit between them. Also astounding is the fact that the stone blocks are notched so that they lock together in three dimensions. Because of this, they have withstood centuries of earthquakes, which are quite common the region.

The Lost City of Wanaku

Perhaps it was earthquakes that sank a temple discovered at the bottom of Lake Titicaca in 2000, near Copacabana, Bolivia. Local folklore has held for a long time that the Lost City of Wanaku rested there. It must have been a delightful confirmation when archeologists discovered this South American Atlantis. The mysterious temple is about twice the size of a soccer field, and is thought to be 1,000-1,500 years old. Stylistic analysis of a giant, head-shaped stone sculpture indicates that the temple was likely built by the Tiahuanaco people.

Legends of Inca gold lost by the Spanish drew the famous oceanographer Jacques Cousteau to explore the ruins. Though he only discovered pottery, archeologists have since found gold and stone artifacts at the site.

Enter the 6th Gateway of Ascension at Lake Titicaca

Lake Titicaca still contains riches for us today — and we don’t have to plumb its depths to find them. Lake Titicaca holds the key to crystalline consciousness. Along with Egypt’s Great Pyramid at Gizaand Ireland’s Hill of Tara, it is one of three gateways to the Threefold Golden Flame. The Uros people of the floating islands are in tune with the sacred energy of Lake Titicaca. They know the deep wisdom of Mama Pacha, our Earth Mother. Join us as we encounter the Doorways of the Gods and experience a shift of consciousness towards the great awakening, a deeper connection to our fellow human beings and the greater powers that birthed us. Ascend the path of love and light in the coming new dawn, and discover your place as a Child of the Sun.