Travel the Sacred Sites of Egypt: The Temple of Luxor

Travel the Sacred Sites of Egypt: The Temple of Luxor 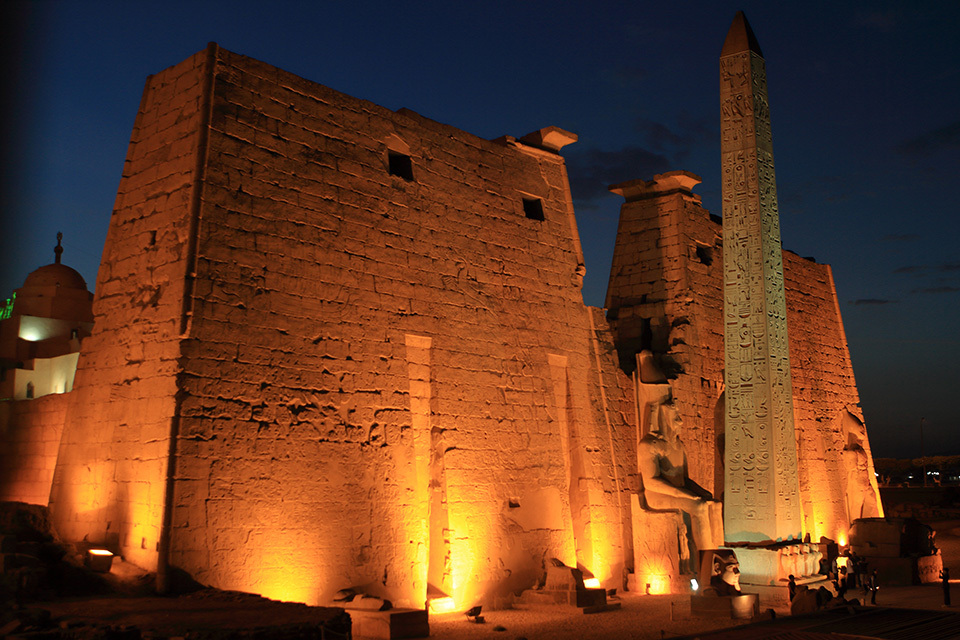 The Temple of Luxor is situated on the east bank of the Nile River, and is part of a large Ancient Egyptian temple complex, known in Egyptian as ipet resyt, or “the southern sanctuary”. The Temple of Luxor was constructed around 1400 BCE in the well-known city of Thebes, or “city of a hundred gates”. Today, Thebes is known as the modern-day city of Luxor, Egypt. Although the passing of time has worn away most of the original mudbrick-built palaces and homes, the stone temples of Thebes have remained, and the Luxor Temple has been a continuously used place of worship, still active to this day.

The Luxor Temple was built with Nubian Sandstone from the Gebel el-Silsila region of Egypt. The Luxor Temple was designed with the same principle of illusionism commonly seen throughout various sites in Ancient Egypt. Two large obelisks that sit outside the entrance appear to be of the same size and same height of the wall that sits behind them, but they are actually different sizes altogether. However, the unique and skillful positioning of the objects changes the perception of relative distance, unifying the size in relation the wall behind them. This spatial and visual effect emphasizes the pathway to the entrance of the Luxor Temple.

Luxor, Amun, and the Cult of the Royal Ka

Egyptian scholars believe that the Luxor Temple once had a significant role in the Beautiful Feast of Opet, an annual festival held in the city of Thebes. During the Opet Festival, statues of the Theban Triad (Amun, Mut, and Khonsu) were paraded from the Karnak Temple in Amun to the nearby Temple of Luxor, a journey of more than one mile.

The Ancient Egyptian Opet Festival was centered around a theme of rebirth, and usually included a coronation renewal ceremony for the current Pharaoh. It is theorized that the Temple of Luxor may have been used as a coronation site for many Egyptian kings throughout history, but new evidence suggests that during the New Kingdom, the temple was dedicated primarily to Amun and the cult of the Royal Ka. References to the cult of the Royal Ka can be seen with the colossal seated figures of the deified Ramesses II before the pylon (the entrance to the temple itself), and statues of the king embodying the royal Ka at the entrance to the Colonnade.

Entrance to the Temple of Luxor: The Sacred Way

Entrance to the Luxor Temple is from the north. The road to Luxor once originated from the nearby Karnak Temple, where an Avenue of Sphinxes known as the Sacred Way marked the route, connecting the two great temples. It is believed that close to 1,350 sphinx statues once lined this road, which would have been ceremonially used in the Opet Festival, during the procession of the symbolic reenactment of the marriage of Amun and Mut. Each sphinx in the row sits on a high pedestal, with human faces resembling Nectanebo the First wearing the Nemes headdress. So far, only a few dozen sphinxes have been excavated, with most of the remaining sphinxes still buried beneath houses of modern Luxor.

On this mystical journey into the heart and spirit of Ancient Egypt we invite you to come and embrace the spirit of the Egyptian culture, its land, people, rituals, and the scents that empowered their rites of passages and ceremonies.

Discover the magnificent beauty and spirit of the ancient Egyptian people and their land as we open our hearts to the deep mysticism and evolution of the human experience all over again. Come away with us on this sacred pathway called Egypt and discover her ancient secrets…