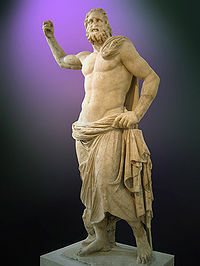 We waved good-bye to Ataturk, and continued on to the Anatolian Civilizations Museum, which would have pleased him because he was one of its many champions.  The museum is situated in two Ottoman buildings constructed in the fifteen century. One had been a bazaar storage building and one an inn, a goldmine for a museum.   Repairs were started the year Ataturk died, in 1938 and continued until 1968. In the early 1940’s one small section was finished and opened to the public. The museum holds artefacts from Palaeolithic times, 8,000 B. C. through to the late Hittite Era of 1200 to 700 B.C and beyond.  As I walked into the first building I had no idea what to expect.  Everyone else was excited about seeing artefacts from the Hittite period  which I gather was mentioned in the bible but I had no knowledge of that time and to be truthful not much interest either.

Well, surprise, surprise.  Within the first few minutes of being in the museum, I walked by a stairway discretely tucked into a small alcove.  The guide was directing us ahead to another section so I barely glanced at it in passing, when something caught my attention.  I took a second look and just about jumped out of my skin.  I saw a relief on the wall partway down the stairs, and thought, no way, it can’t be!  But sure enough, there, in a Turkish museum, 1500 kilometres from home, was Poseidon!

What are you doing here I whispered?  He gave me a wink and said, “Come back later when you can spend a few minutes. “  “Ok, ok”, I said and caught up to the group.    I kept looking over my shoulder though, thinking, “What the heck?”  And then the other shoe dropped.  Just a little further down the room, amidst all the other figurines of primitive goddesses was one holding a pomegranate and I thought, Holy smokes!  I think she was called Kabuba but to me she was Persephone!  The pomegranate has always been her symbol. I knew it was her!   What was going on?  What were Poseidon and Persephone doing here in Turkey?

I followed the group through the museum, looking at various artefacts, but had a terrible time connecting.  I had no idea who these people who lived thousands of years ago were.  I didn’t know a single story of even one of them.  There was no thread to connect me although others might say, “How can you say that?  Every which way you turn, there are relics of their past, cooking utensils, pieces of clothing, etc., etc.  How can you not connect? ”

Well, I might be shallow, but all I can say is that the only pieces that gave me a little insight into them were the rings, necklaces and other pieces of jewellery.   When I looked at a piece, at a ring for example, I could visualize the type of woman who would wear that particular ring.  Another beautiful necklace of gemstones would have me wondering what kind of an artist would have created such an exquisite piece of art, and for whom.   Still, I was far more interested in what Poseidon and Persephone were doing there and was waiting for an opportunity to kind of slink over and chat.  But that wasn’t to be.  We sauntered off to the other building so that window of opportunity was closed.  By now I knew there would be others.

We hit the road later in the afternoon and headed for Cappadocia via the Salt Lake Road.  5 or 6  hours later we arrived.  We were all excited because enroute, a few minutes away from our hotel we could see the Fairy Chimneys in the distance.   Tomorrow was going to be spectacular.

We checked into the hotel and after dinner, I relaxed a bit and then my head hit the pillow.  Within seconds, my conscious mind drifted off to sleep and as quick as a flash, there was Poseidon.

“What?  What?”   And then it clicked. No wonder the gods were angry with me.  Poseidon shook his head.  “You know better.  How could you forget to honor the guardian of Turkey when you were landing at the airport?  How could you forget to pay your respects and ask for a blessing on your journey?”  I felt very ashamed.  He was right.   “I’m sorry.  How do I fix it?” “You can do it right now,” he said.  “Light your candle, and offer your respects.” “But I have no idea who the guardian is?” “That shouldn’t matter.  You are making an offering to the essence of the being, not a physical image.  Do it.”  I shut my eyes and talked to the guardian of Turkey, begging forgiveness for my disrespect and promised to bring back a figurine of a Turkish deity to put on my altar.  When I was finished, Poseidon said “Good.  The guardian still isn’t pleased with you but has accepted your apology.  Mind you, the effects of your omission have already been set in motion, so there is no escaping that, but the outcome has been modified somewhat.    I tell you girl, you have to pay attention more.”  “ Poseidon, who is the guardian of Turkey?” “Well”, he said, “I can’t tell you.  You’ll have to figure that out yourself. “

“Ok”, I responded, “now tell me about Persephone.  What is she doing here?” “My niece?    Well, you have been drinking fresh pomegranate juice every day this week, so she thought you were calling her in.” “ Ohhhhhhhh no! No, no  NO.  Poseidon, you have to talk to her.  I am really happy to see her, but I am on holidays.  I don’t have time to spend time in the underworld with her.  I can’t be dealing with my “issues” right now!” “ Really,”  he said,  “and where are you going tomorrow?  Huh? You are going to be visiting underground cities.  It’s the perfect time!”    He started to say something else, but then the call to prayer woke me and he vanished in into the mist.

The next morning I ate fresh yogurt, laden with honey and the sweetest melon I have ever tasted.  Everything was made locally and I hoped that my selections might attune me to my environment and thereby soften the guardian. I also fortified myself with three cups of coffee, double my usual but thought who knows what’s ahead.  I got on the bus loaded for bear. We quickly made our way to Kaymakli, the Underground City.

I might not have felt connected to the people whose belongings were in the museum, but I certainly felt linked to the ancient dwellers of this site.  Imagine an underground city eight stories down.  That’s a pretty big apartment building!  And I understand that although this city might have been one of the widest, it certainly wasn’t the deepest.  Eight stories, imagine!

The first story was set up as a stable, which of course makes sense.  The first thing they would do when they got home would be to look after the horses.  They certainly wouldn’t want to bring them down to other levels, especially the kitchen or their bedroom.  From there, they would go past the millstone door, down to the next level, which housed the church. They were a very religious people and although some of the underground cities go back to the Hittite time,  some, like this one, must have been built after the time of Christ, because why else would there have been an altar and a baptismal  font.  Also, on this floor, were some of the graves.  They held their family close.  Life and death were neighbours.

The next level was where the winery, storage bins, and the kitchen were located.  Here was the hub of the community where everyone gathered and where the ventilation shaft that went all the way to the bottom was visible.  Further below, were the rooms, located around the shaft, where they retired at the end of the day.  I could picture their routine in my mind.  First, they looked after the animals, then they entered the church and offered thanks for having returned safely, laden down with the bounty of the day, whether it was fruit, vegetables, or wood.  Then they would say hello to the relatives long gone and then from there,  continue down to the winery and kitchen.  They’d have a glass of wine, chat with their friends, have dinner and then later retire.  Because of the nature of the architecture, the rooms obviously had no doors, so one could crawl into his own bed in his own space and yet be connected to everyone else.    I imagined them going to sleep in complete darkness, without a shred of light.  What would that be like I wondered?  Similar to going into the great void I expect.   Pretty cool I thought, as we moved from room to room.

At times the walking was easy.  At other times, I was squatting and walking like a duck, going through low, slopping, narrow passages as we continued exploring.  I felt like I was walking and sometimes crawling through the corridors of my mind, entering into ancient and primitive places I didn’t even know existed.  In a sense I was.  In the collective, we are all connected and these beings of 3,000 years ago are as much a part of our DNA as are our parents.  These people were part of our history, our ancestors, and  I wanted to know more.  I wanted to dream into them, see them as they lived here.

An hour or so later we remerged back into the light above ground and from there went to spend time among the fairy chimneys close by.  The shapes of these “chimneys” seemed to speak to an ancient part of me and I felt like I was walking between the worlds.  I knew these formations were formed as a result of erosion of the top layer, which was sculpted by wind and flood water running down on the slopes of the valleys, and a series of other events.  That’s a wee part of the scientific explanation that I can remember.  But I think they grew up through the earth, the energies of the underground people bursting through, like a shoot of a plant, bringing their thoughts and feelings and the beauty of their souls into the light of day.  I thought of the saying “As above, so below”, though in this case, I could see a circle of continuous movement as each fed the other.

As I crawled into bed that night I said a prayer of gratitude to Persephone, Poseidon, my ancestors and Finbarr for bringing me here, oh and yes, to the guardian of Turkey.