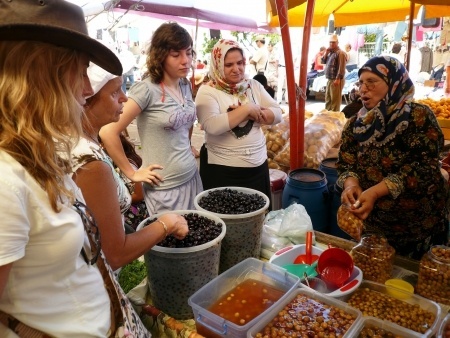 There is truly an art to bargaining in the Middle East that we are never taught here.  It comes naturally to those who have learned it at their mother’s knee, but for the rest of us, well, we stumble and fall and pardon my English, make complete asses of ourselves, or at least that has been my experience.

Everything I learned about haggling I learned from my sister, in years gone by, when we would go garage saling. Think of it!  The seller would have prices marked $5.00 and Gina, my 60 year old Gina Lollobrigida  would smile and say forlornly, would you consider $4.00?  Or, would you take $4.00?  Sometimes it worked, sometimes not.  I also got a few tips from her hubby.  A few years ago we were all in Europe at the same time and hooked up in Paris for three days and of course ended up at the famous Porte de Clingancourte, otherwise known as Les Puces de Saint-Quen.  I very quickly learned that when you were ready to start the process, you had to make sure you flashed the exact amount of cash, as you peered into the eye of the vendor.  That way he knew you were serious and would pay that and no more.  Of course, there were different rules if it was a man or a woman.  If the vendor was a woman, Gord would charm her as he negotiated.  If it was a man from the middle east, again, Gord would engage him.  If it was a Caucasian man, then Gina and I would start the dance.

I also learned that before you even start, you had to know what your bottom line was and be prepared to walk away if it was not met.  The other thing was, you had to be sure you wanted the item in the first place because to wheedle him down to your price and then change your mind would have just been very bad manners and not ethical.

Armed with all of these wonderful tips I left Canada feeling  I had a bit of a handle on what to do.  Even after I arrived in Turkey, I got some lessons from my travelling companions, especially Mauve, our 70 year old blond sophisticated countess.  She would zero in on what she wanted, then start the bargaining process.  She would wear him down to a certain price, and then proceed to the till. She would then take out her 100 Turkish Lira and say, that’s all I have.  He would plead, but she would stay insistent and most times would be successful.   She had one steadfast rule.  Never  start bargaining unless you mean business.

I know all this talk of shopping and bargaining might confuse you a bit.  You might think that because this was a mystical tour that there wouldn’t be much shopping, but let me set you straight.  You can only be in the land of the fairies so many hours of a day.  The rest of the time you have to be grounded wherever you are, and our grounding techniques involved wine at dinner, and shopping in the afternoon.

I didn’t partake too much for a number of reasons, some of which I will explain in other writings, but suffice to say that I wandered in and out of ten or twenty shops a day with my fellow travellers, giving my comments, “Yes, that scarf is the perfect t colour for you, no I don’t think it is worth $40.00, yes, that bag is beautiful, no, I don’t think he will take $50.00 instead of $150.00 and so on.

After a while I wanted to start getting into the game.  I started out slowly.  At one shop, a week into our tour, Lori wanted to buy two scarves and Patricia one.  We totalled the costs of all three and that came to about $70.00. I volunteered to be the spokesperson and asked if he would take $50.00 Deal!  I did it on some soap that was 2 for $12.00 and got it for $10.00 Small potatoes, I know, but it was fun.  But I wasn’t quite as good as I thought.  Pride always comes before the fall.

On the last day of my trip, Lori, Patricia, Finbarr and I met in the lobby for a day of exploring.  We decided to saunter through the old town toward the Spice Bazaar.  On the way, we slipped in and out of little shops, ooing and ahhing at everything from colourful scarves, to pottery and Turkish delight.  The clean storefront  windows displayed their wares that often spilled out onto the sidewalk.  Our senses were overloaded with fragrances, bright colors, textures and sounds.  As we were ambling along I spotted some leather ottomans, the ones that fold down into the size of extra large pizza and expanded into the size of a small round coffee table when stuffed.  They were priced at 15 Turkish Lira. I stopped in front of the store to look at them and thought, one of those would be perfect in my living room.  I could sit on my blue leather couch like a sultan and have my feet resting on this beautiful blue ottoman.

We girls were getting ready to leave when Finbarr good-naturedly said, “Hold on, hold on ladies!  You are not the only shoppers here!  Surprised, we turned around and went back in.  Men shopping!  That was a new phenomena for us. Finbarr had spotted a leather bag about 9 x 12 in a rich tan color, perfect to put his business papers in.  He asked the owner how much.  He gave Finbarr a price, and Finbarr responded, “No, no , no, too much.”  The man came back with, “We can discuss the price.”  I feigned indignation and said, “How come you bargain with him and wouldn’t with me!”  Lady, he said, this is $400.00 lira.  Yours was $15.00 How much money could I have made from it.  Come on!  Chastened, I said, ok, I get it.

We ladies decided to wait outside and give the men privacy to conduct their business.  As I walked out, the man said, wait, wait.  I have something for you.  He gave me a gift, a little red fridge magnet with the symbol of the Turkish flag on it.  I loved it.  In a few moments, Finbarr came out smiling and the man waved goodbye with a satisfied look.  It was a good sale!  I silently thanked the man for a valuable lesson in bargaining.  Don’t sweat the small stuff.  Go for the gold and let the small businessman make a living!

There is also another subtle aspect to bargaining that I shamefully found out as well.  I was lucky in that I was able to correct my faux pas quickly and honourably but it hurt.  I didn’t go to Turkey with a shopping list because I have learned the hard way that what seems to be quite lovely in another country just ends up sitting on a shelf for a year or two and then finds it’s way to a thrift shop as a donation.  I remember  saying more than once “What was I thinking”.  So as a rule I try not to get caught up in the having to buy something just because it is so beautiful.

At the same time, I had heard leather was cheap in Turkey and I did need a new purse so I kind of kept my eyes open for one.  I had all but given up finding one I liked when two days before we left, we spent three hours at the Grand Bazaar.  I wandered through a number of leather shops before I spotted one that I kind of liked.  He brought out the same purse in three different sizes.  He was a very nice man, in his forties, with cute dimples and was quite happy to have three women in his shop, especially Lori with her blond hair.  We talked about Turkey, the States, Canada and our lives and then he started the bargaining at $150.00 U. S.  I talked him down to $100.00 over a ten or fifteen minute period, during which he offered and we accepted apple tea.  It was a very pleasant experience.  I went to pay him and pulled out 100.00 Turkish Lira.  When I handed him the money his face clouded over, his eyes expressed surprise and he had a look on his face that conveyed hurt and betrayal as if he was saying, I trusted you.  How could you disrespect me like that? I could see that I had gone down in his estimation considerably.  And it wasn’t about the money, it was about bargaining in good faith.

It took me all of a second to realize what had happened.  We had agreed on $100.00 U.S.  and here I was offering him Turkish lira which would have been the equivalent of $60.00.  As soon as I realized my mistake, I apologized profusely and said that was not what I intended to do and he was ok again, but that look of being wounded  pierced my heart.  I realized that there is a real honor to bargaining and that at times, we who are unskilled push the envelope too much.  I did it unwittingly, but some do it with intent.  I ended up paying him $160.00 liras, or $95.00 and honor was restored but it was such a good lesson.  Done correctly and respectfully, bargaining is a satisfying experience for all.  If not, well, enough said.