The famous Sikh temple recognized by its golden domes is associated with the 8th Sikh Guru; Guru Hari Krishnan and is one of the most prominent Sikh gurdwaras (Sikh house of worship) for many aspects. Devotees come from far and near to rid themselves of suffering by taking water from the Holy Lake, known as The Sarovar. The waters are believed to be quite healing. This is the site where a small miracle was performed by the Holy Guru Hari Krishnan.

Finbarr will guide you through the beautiful library while the rhythmic chanting of the Sikh's can be heard throughout. There is a Langar which is the community kitchen of the gurdwara, which serves meals to all free of charge. In this particular Langar Hall often 1,000 people of all religions, races, castes and genders, economic status or ethnicity join together and share a meal.

By the request of Mughal King Aurangzeb the visit of Guruhar Krishnan took place in this very spot; the center of Delhi. General Sardar Baghel Singh was commissioned to build this monument in 1783. The gleaming marble courtyard creates a feeling of peaceful envelopment. It is surrounded by ornate alcoves often occupied by families gathering. The golden arches, canopies and domes host the continuous people coming and going. You will hear musicians softly playing the Gurbani; religious hymns. Perhaps devotees will be chanting as they are sung from before sunrise until nightfall. The Shri Bangala Sahib is indeed a prominent Sikh house of worship and a wonder to all who visit. 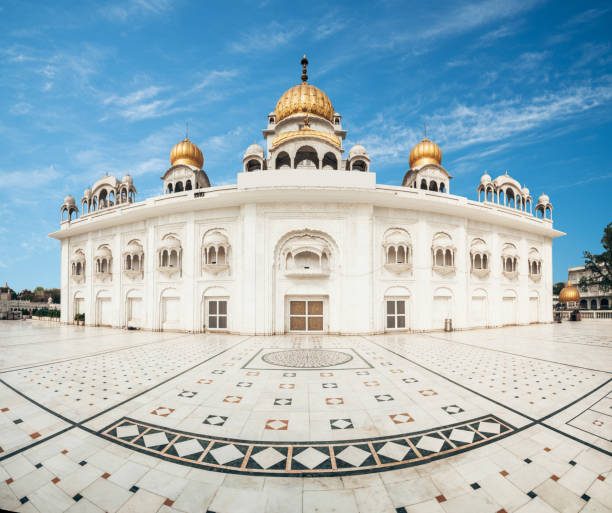