The archaeological site north of Varanasi is one of the 4 most important Buddhist pilgrimage sites in the world. Finbarr will take us on quite a Sacred Journey through the intricacies of this energetic and mystical wonder. It is where Buddha gave his first sermon or discourse in a deer park. It is here where he revealed to his first five Brahmin disciples the Eightfold Path leading to Nirvana: To set in motion the Wheel of the Dharma; The Wheel of Law. The site contains a massive stupa. Dhamekh Stupa, dating back to the 3rd century B.C. was constructed by the Mauryan Emperor Ashoka. Also known as Ashoka The Great: The Indian Emperor of the Mauryan Dynasty. The emperor was known for his devotion. It is believed that King Oshoka buried small pieces of bone and other relics of the Buddha and his disciples within the Stupa and surrounding structures as well. The lower portion of Dhamekh Stupa is covered completely with beautifully carved stones, intricately carved with flowers, vines and geometrical patterns. It is higher and larger than most stupas, anywhere.

The famous Lion Capital is the 'head' or top of a memorial pillar or column erected by Emperor Ashoka. The four Asiatic lions facing out and back to back in a circular abacus are made of sandstone. Included in the Lion Capital are many significant symbols including a stylized upside-down lotus. Because of its historical and sacred significance it is now the National Emblem of India. There is an Ashokan pillar with an edict engraved on it that stands 'reverently' near the stupa.

We owe a great deal to the archaeologist Sir Alexander Cunningham who studied with great interest Emperor Ashoka's life. He traveled to the site in 1837 where he excavated carefully and prepared drawings of the stupas, sculptures and pillars. He was knighted in 1887. 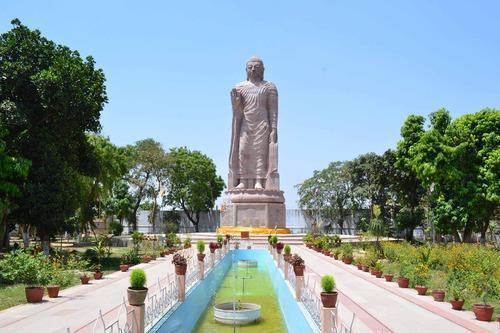