Representing the miracle of ancient Egyptians' knowledge of astronomy, engineering and orthogonal architecture, the great ABU SIMBLE TEMPLE in Egypt is one of the most beautiful. There are actually two temples; one honoring the King Ramses II and the smaller dedicated to his favorite wife, Nefertari with much symbolism found in the statues. Ramses wears the Pschent Crown; the double crown for Upper and Lower Egypt. There are smaller statues of family members. Many baboons with arms raised to the sun gods symbolize the dedication of the temples to Amon-Re, Ptah and Ra-Horakhty. These sun gods were highly revered throughout the history of ancient Egypt. Hieroglyphs depicting battles and other historical scenes are intricately carved into the stone. The Nefertari Temple at Abu Simble is dedicated to the goddess Harthor; protector of women, honoring love, beauty, music, fertility and pleasure.

Finbarr Ross on his The Sacred Mystical Journey tour will guide you through this ancient, spiritual site. In the evening enjoy the magical Light and Sound Show. Allow for the ancient vibrations and energy that permeate this site to uplift you. Be amazed by the astounding interior Hypostyle Room which is supported by 8 large Osirian Columns representing deified Ramses and linking him to Osiris; God of the Underworld. Thus indicating the imperishable nature of the Pharaoh. During the Sun Festival the inner sanctum is illuminated twice a year. Otherwise dark, this special solar alignment sunlight streams upon the 3 seated sun gods and Ramses, leaving the god of darkness; Ptah, indeed in the dark. This is further evidence of the spectacularly advanced civilization of the Egyptians. It is believed that the specific intention of the inner sanctum being illuminated by the sun rays was on auspicious days. Perhaps they were King Ramses' birthday and coronation. Further evidence of the sacred intentions and masterful precision is that The Abu Simble Temple is designed to withstand even the most powerful earthquakes. 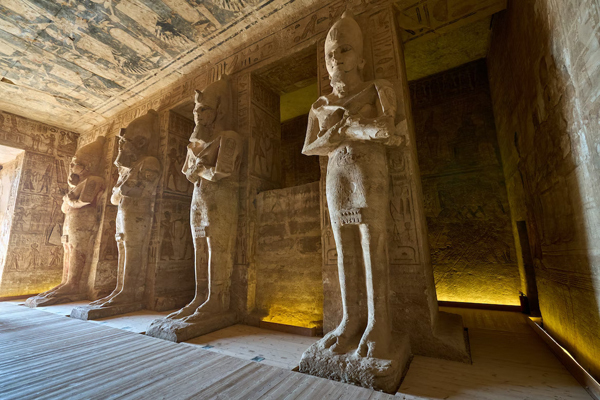