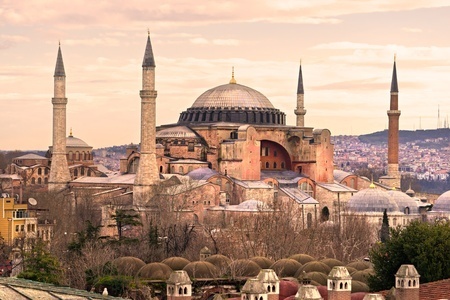 One moment we were in Ephesus and the next, after a short flight we were in the heart of Istanbul. I love, love, love that city, the food, the spices, the smells, the music, the haunting call to prayer, the fast bustle of the younger generation as they weave their way around the matured ones who move in the contemplative slow paced manner of their ancestors.  There was ample room for both as they walked past ruins thousands of years old saddled up to contemporary buildings.  Underlying it all I noticed the fierce proudness of the Turks.  It has always been there and always will be. There is a dignity to be seen in every face and an openness and acceptance of life and others.   It was wonderful to be part of that.

One of our first stops upon our arrival was Aya Sophia.  I had already visited so many beautiful sites and been touched deeply in various ways, but nothing prepared me for what I saw there.  The vastness, the sheer opulence, the icons, the colours, the architecture, all of it was like walking into the mind of God and seeing beauty and brilliance everywhere.  I suspect that if one could spend a month, day in and day out, in that sacred space alone, in silence, and simply viewed the images that veiled doorways in one’s psyche would be uncovered, revealing deeper parts of the Universe. I felt that just being there at all had a hidden effect.  There were ancient stories being told there through the icons.  One only had to look.

As we walked around and gazed at the various mosaics, Finbarr pointed out different subtleties in the position of the hands and other details that would differentiate one religious figure from another.  It added a deeper understanding to what we were viewing.  I marveled that my shoes were touching the same surface as others had 1500 years ago.   So many things had happened during that time and yet, this treasure had survived it all, embraced it all.  It was pillaged, fell into disrepair and was restored more than once.  It served as a Christian church, an Orthodox church and a mosque.  Medallions inscribed with the names of Allah, Mohamed and other Arabic writing can be seen as readily as the mosaic panels.  This sacred building is named Aya Sophia not by chance.  Sophia means Wisdom and that crosses all time and all religions.  Truth is truth. I gave a silent prayer of gratitude to the architects and builders of this wondrous building as we left.  I had no doubt that I would return someday.

From there we took a short walk to the Blue Mosque.  When I first arrived in Istanbul two weeks earlier it was the first place I visited and even though I hadn’t spent a lot of time there, when I re entered the building it was like I was visiting an old friend.  I went in respectfully, wove my way around visitors and those who came daily to worship and went to a little spot out of the way that I had found on my previous visit.  I sat quietly and just soaked in the atmosphere and gazed at the ceiling covered in blue tiles and the designs around me.  There were arches and circles and curved triangles and everything seemed to have soft edges and rounded corners.  There was nothing harsh or rigid about anything there.  The rich golds and the blues and the greens and the sunburst oranges seemed to weave into each other and dance around symbols that spoke to the part of my psyche that thrives on images, not words.   After a bit it was time to leave.  This is still a working mosque and at prayer times the doors are closed to the public for an hour or two.  Then they are re-opened for pilgrims to enter.  The energies of the new prayers have blended in with those of centuries before.  Time does not exist here.

I was so glad that the tour was arranged in such a way that we spent our last few days here in this ancient city and in the old part of Istanbul. We visited a few more places that day, Topkapi Palace, the Grand Bazaar and others and I crawled into bed an exhausted happy traveller.

The next day was the last one in Istanbul for some of us and Patricia, Laurie, Finbarr and I met in the lobby for a day of exploring.  We went to the spice bazaar and sauntered all through it for a few hours.  Then we were ready to move on.  Patricia suggested we might want to take the ferry across to the Asian side and have lunch there.  We were eyeing the five or six lanes of traffic, and looking across the highway to where we wanted to go but couldn’t see how to get there from where we were because of abutments when Finbarr spotted a sign for the underground walkway.  We followed him like three little fledglings following Mother Goose.  At times it was like being in an underground subway in New York or Toronto with hoards of workers briskly walking by.  Other times we could have been in any cruise port as the locals hawked their goods, jeans, batteries, scarves, lace, hats and food and even eyes of protection.  It was all there in less than a city block.  We emerged from the caverns to the light of day and immediately were approached by a wiry, fossilized gentleman in his 70’s.  He had dark eyes, set deep within his face, overshadowed by bushy eyebrows.  That and his unruly mustache gave him the air of Zorbas the Greek and his manner was similar.  “Lady, lady, where do you want to go?  Come with me!  I’ll  take you.”

The long and the short of it is he offered to take us to the Black Sea, give us time for lunch and then put us on his boat to sail back to where we started.  I was pretty sure he said for 60 Euros.  When he confirmed the price, we said, too much.  He came down to 45.  We hemmed and hummed and finally Finbarr took control and said, “It’ll be an adventure!”.

And it truly was.  We had no idea how far it was to the sea. It only took a few minutes or so for us to fathom that we had at least an hour’s ride ahead which left little time for lunch.  I ended up sitting in front with him.  We didn’t know we had hired a frustrated race car driver and a few times I had to shut my eyes.  Then I thought, if I’m going to die today I want to see it coming!  So instead I chatted away like a magpie, teasing a bit and simply enjoyed his company.  Two hours later we arrived at the Black Sea and he brought us to a quaint little restaurant right at the water’s edge and we had the most wonderful fish dinner I have ever had.  To sit close to the sea, in the salty air, with no traffic, cars or otherwise, around us was perfect.  Turkey was showing us one of her treasures and we were so grateful.   Later, we hustled to get to the ferry on time to get back to Istanbul.  It was an incredible day, one I will never forget.  Thank you, Hermes, for arranging such a day of fun and adventure and laughter.

As I got on the plane next morning I was filled with love and gratitude to the Universe.  I was going home a different person than I was a few weeks earlier.  On the outside there might not have appeared to be any changes, but inside I felt softer, more open, like someone had opened the windows and doors of my soul and let fresh air and light in.  I had had a spring cleaning of the psyche in the fall, which was kind of apropos.  Sometimes you just have to get out of your routine, comfortable life and just do things backward!  Ahhhhhhhh, I thought as the blinders were lifted.  I could see where Hermes had been working behind the scenes throughout my whole trip, not just on the last day. In fact, he was on the job before I even left home.  He is the patron of travelers, the messenger and the trickster.  How could I have not clued into that earlier?

I started this journey with the intent of joining Finbarr’s trip to France but through a comedy of errors, set up by Hermes I can now see, I ended up in Turkey instead.  For some reason that trip had to happen first.  I suppose I won’t find out why till September when, if the gods allow I will take Finbarr’s Mary Magdalene’s trip to France.  I am sure the answer is there but whether they will reveal it or not, I don’t know.  I only know I can hardly wait to see what the Universe has in store for me on that trip! Bon Voyage!