Travel the Sacred Sites of Egypt: The Great Pyramid at Giza

Travel the Sacred Sites of Egypt: The Great Pyramid at Giza 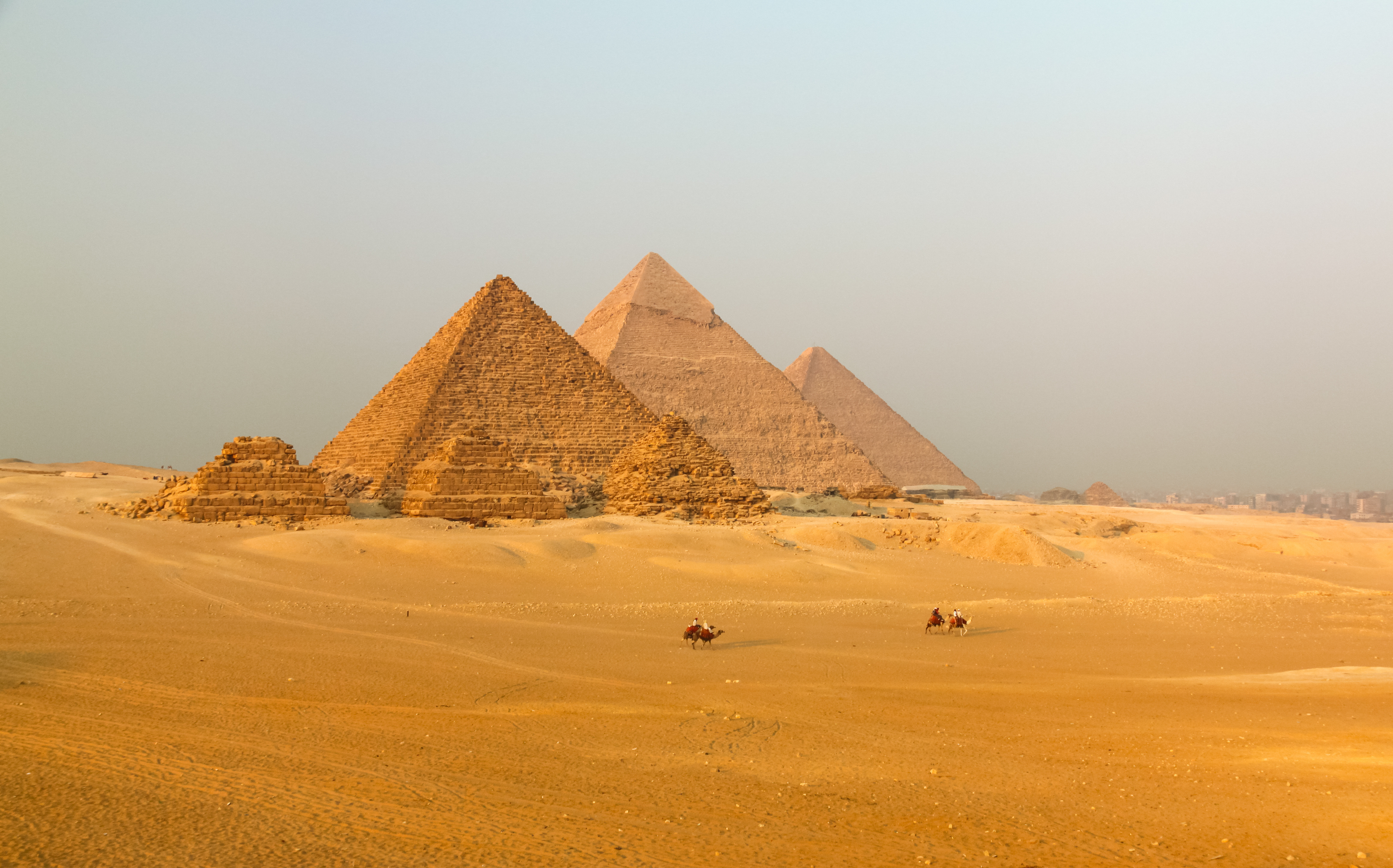 The Great Pyramid at Giza remains one of the most mysterious structures on the planet. It is the oldest of the Seven Wonders of the Ancient World, and the only one that’s still mostly intact. This is a miracle, considering that the pyramid is over 4,000 years old. With a foundation of 13 acres, the Great Pyramid is the largest of the three pyramids in the Giza Pyramid Complex, and is larger than several European cathedrals combined. It’s a solid mass of stone blocks, except for a few chambers, and the shafts that lead to them. The pyramid was drafted and erected under the rule of Khufu, also called Cheops, second Pharaoh of the 4th Dynasty of Egypt.

Construction of the Great Pyramid was truly a feat of engineering skill. Scholars still aren’t sure how the ancient Egyptians were able to cut and move the tightly fitted limestone and granite blocks that form the pyramid’s core. They transported over 2 million stone blocks, each weighing 2-16 tons, from quarries about 500 miles away. All this was done in a period of only 10-20 years, ending around 2560 BC.

Today, the Great Pyramid’s “casing stones” are missing. They were loosened by an earthquake in 1356, then taken and reused to build mosques and fortresses in Cairo. Originally, these casing stones formed the outer face of the structure that remains. They were highly polished slabs of white limestone fit so tightly together that even the thinnest blade couldn’t fit between them. The masonry required to accomplish this, especially in that time period, is remarkable.

According to Herodotus, who visited in the 5th century BC, the casing stones of the Great Pyramid at Giza were covered in inscriptions. Other visitors and historians noted these symbols as well. The hieroglyphs numbered so many, they could have filled thousands of written pages. The destruction of the stones has led to the loss of this ancient wisdom. But great power and sacred energy remain at Khufu’s Great Pyramid.

Sacred Burial Grounds – The King’s Chamber and the Golden Mean

The Great Pyramid was intended to be a necropolis, though no mummies or grave goods have been found, likely because of looting. The 4th Dynasty pharaohs were known as “the pyramid builders,” because the pyramids built under their reigns were far superior to those of 3rd and 5th Dynasty pharaohs, in both size and quality. Though the necropolis in Giza was eventually replaced by the Valley of Kings near Thebes, New Kingdom pharaohs worked to honor and preserve the site.

Surely the pharaohs of old felt the sacred aura of the region. The ancient Egyptians were a civilization blessed with exceptional wisdom and technological advancement. The King’s Chamber is believed to have held the pharaoh’s tomb. The chamber’s measurements fit the mathematical proportions of the Golden Mean, or Phi — though Egyptians designed this space long before the Golden Mean was “discovered” by European mathematicians.

The Celestial Ascent of the Pharaohs

The pyramid’s shape and orientation are also significant. Its corners align with the cardinal points on a compass, and its towering form works as a sundial. Its northern shadow and southern reflection of sun precisely marked the dates of solstices and equinoxes. It is no surprise that the pyramids are said to have been a regenerative place for Egypt’s deceased kings. In order to have the materials and labor to build the Great Pyramid, the ancient Egyptians must have had a sound government and an abundance of wealth. It has been rumored that the pyramids were built by slaves. But evidence suggests that in reality, the 4th Dynasty pharaohs provided well for their workers, in return for a blessed afterlife. The pyramid shape is like an inverted ray of sun, a ramp for the pharaohs’ celestial ascent.

In fact, the earliest pyramids were designed like steps, as of a staircase. Pyramids are crowned with a sacred Benben stone, symbolic of cycles and rebirth. This is an Obelisk-like stone representing the hill where the creator god Atum (the Supreme Solar God) first stood. On this mound, Atum rose from the primordial waters and dark chaos, and created new life.

The Great Pyramid’s capstone was originally gilded. Together with its polished casing stones, it would have shone far, reflecting the bright light of the Egyptian sun. The capstone of the Great Pyramid at Giza is still a powerful force today. Through it, the Golden Flame beckons us to experience its vibrational energy. To ascend, with the Egypt’s kings of old, on our own Jacob’s ladders.

Enter the 6th Gateway of Ascension at the Great Pyramid

Egypt’s Great Pyramid at Giza is on the same ley line as the Hill of Tara and Lake Titcaca. Together, these sacred sites form the Three Gateways of Ascension. The 6th Interdimensional Doorway will be opened on Autumn Equinox, 2017, when the sun aligns with the Great Pyramid at Giza.

During our Egypt Sacred Sites Tour we will access the newly opened portal, with a special initiation into Universal Consciousness. Our voices will each quietly fill a resonating chamber at the top of the Great Pyramid. Join us in this deep spiritual phenomenon of Self Realization as we discover Sacred Egypt.