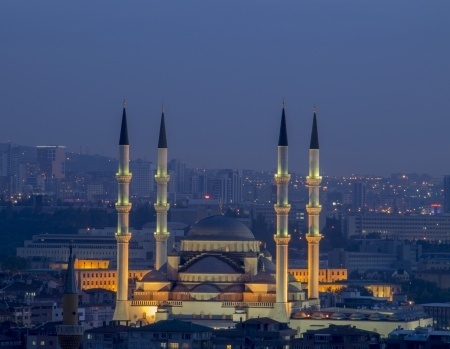 Once I got to Ankara, things seemed to settle down a bit.  I had met Patricia, a tall blonde lively New Yorker at the Istanbul airport.  She was one of my fellow travellers. We skipped over to Ankara in record time.  Finbarr met us there and before we knew it, we were at our hotel and checked in.  I had an end room, with windows on two sides facing out to a beautiful mosque.  Life was good.   I slept like a baby that night and was again serenaded at 5:30 the next morning with the call to prayer.  I listened for a moment, smiled and happily went back to sleep.

We had a safe in our rooms so the next morning, in went my passport and Patricia and I were off exploring.  We weren’t expecting the rest of the group till evening, so we took a bus to a bazaar she had read about.   I got to know Patricia a little as we browsed through numerous shops including hardware stores.  She felt they gave you insights into the souls of a culture and she was like an archaeologist looking for clues.  We had such fun and finally returned home late afternoon bedraggled and panting like two puppies after a long run.

That night I met the other three ladies I would be travelling with, all wonderful women.  There was Linda from Lake Tahoe.  She was tall and trim, with short blonde hair and incredible blue eyes.  There was Mauve, a Londoner who looked remarkably like Julie Andrews and had the same regal bearing. She was quite lovely.  And then there was Lori our little blonde pixie who ran a healing center in Wisconsin. I also met our Turkish guide, Hakan, who would be with us the whole trip, but more on him later.  Everyone seemed to have a sense of humor and I felt lucky to be travelling with these easygoing people.  I could hardly wait to hit the road.

The next morning we checked out, got on the bus and then not long after made our first stop, at the Mausoleum of Ataturk (Mustafa Kamal).  He is called the founding father of the Turkish Republic.  The first thing that struck me was the enormous size of the mausoleum and the surrounding grounds. There are four main parts to it: the Road of Lions, the Ceremonial Plaza, the Hall of Honor  and the Peace Park that surrounds the monument.

Road of Lions and Ceremonial Plaza

The approach to the monument is an 860 ft long walkway lined on both sides by twelve pairs of lions.  I was told they stand for both power and peace. As I walked along that pathway I wanted to stroke every one of them.  At the end of the Lions Road we entered the Ceremonial Plaza.  It is quite impressive, about the length of a football field and almost twice as wide and can accommodate 15,000 people!

Next, we approached the Hall of Honor which houses Atatürk’s tomb. You enter the mausoleum through huge brass doors and as we walked in I was wowed by the height of the hall and the splendour of the ceiling.  It had columns close to 50 feet tall and the ceiling was inlaid with gold mosaics.  At the north side we could see a huge marble cenotaph, said to weigh 40 tons.  Beneath this, in the basement, lies the body of Ataturk, in a special Tomb Room.  There didn’t seem to be access to it, but still, I thought it must be of comfort for those who revere him to know he is so close.  The architect who designed this and the craftsmen who built this must have had a deep love for  Ataturk to create such a work of art to house his remains and to set this jewel in the midst of nature, the Peace Park, named in honor  of his famous words  “Peace at home, peace in the world.”

Later, as we walked around we passed a statue group made up of three men, a Turkish soldier, a young man holding a book in his hand, representing an intellectual I think, and behind them both, a Turkish peasant.  When I looked at it, I wondered, “Is this how Ataturk perceived the heart of a Turkish man – a warrior, an intellectual, and a man of the land?”   I was starting to like this guy.

There was also a museum that houses some of his personal items.  Throughout it and elsewhere were plaques with inscriptions of quotes by him.   Later I read some translations of those and others placed elsewhere:

“One day my mortal body will turn to dust, but the Turkish Republic will stand forever. “

“There are two Mustafa Kamal.  One is the flesh and bone Mustafa, who now stands before you and who will pass away.  The other is you, all of you here, who will go to the far corners of our land, to spread the ideals which must be defended with our lives if necessary.  I stand for the nation’s dreams and my life’s work is to make them come true.”

“To see me is to not necessarily see my face.  To understand my thoughts is to see me.”

“Heroes who shed their blood and lost their lives.  You are now lying in the soil of a friendly country. Therefore rest in peace.  There is no difference between the Johnnies and the Mehmets to us where they lie side by side here in this country of ours.  You, the mothers who sent their sons from far away countries, wipe away your tears. Your sons are now living in our bosom and are in peace.  Having lost their lives on this land they have become our sons as well. “

As I read about him, looked at pictures of him, and then watched him give speeches in the multimedia show, I felt I got a little glimpse into his soul. I saw something in his eyes that spoke of depth and knowledge, kindness and fierceness and passion.  I wished I could have known him.

The little bit I did learn was that he was an army officer, a statesman, a writer and considered to be the first President of Turkey. I read that it was during the battle of the Dardanelles at Gallipoli that he became a national hero. He was promoted to general at 35 and his military campaigns gained Turkey independence, which is why he is called the founder of the Republic of Turkey.  He then focused on striving to bring the former Ottoman Empire into a modern and secular country.

In the midst of that, at 42, he married a beautiful well-educated woman and then divorced her two years later. Some said it was because he found her too independent.  Who knows? He never remarried, but he adopted a number of children.  There seems to be some confusion as to how many.  Some say it was seven daughters and a son with him taking on the care of two additional two children. Other stories said he had twelve daughters and a son.  Either way, he had a large family, which says to me that he cared.  He was an intellectual and somehow found time to write books, keep a personal journal and read.   He dressed well, stylishly, liked music, dancing and having a drink or two.  He seemed to have lived life fully right up until he died at 57, in the Dolmabahce Palace.

I don’t imagine that people who knew him were surprised that he donated most of his possessions to the Republican People’s Party.  He died as he had lived, with a deep love for his country and his people.  He might not have been a perfect man.  There are stories written that show him to be otherwise.  Still, I don’t need my heroes to be saints and as we left the Mausoleum I felt grateful and richer for having met this remarkable man.