Mysteries of the Incas at Machu Picchu

Mysteries of the Incas at Machu Picchu 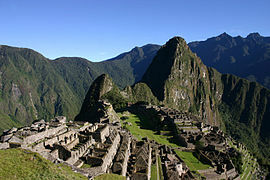 There is something mystical and magical about a “Lost City In The Clouds”.  Just hearing about a “lost city” appeals to our desire for adventure.

Machu Picchu is just that, a mysterious city of stone, covered in jungle for hundreds of years and forgotten even by its people.  When Hyrum Bingham discovered it in the early 1900’s he was in search of the lost empire of the Inca’s.  Is this what he found?

That is the mystery.  No one truly knows what the site was used for.  There are many thoughts and ideas, assumptions made as historians and archeologists search for meaning in what remains of this lost city.

Machu Picchu is clearly a place of power, a site of ritual, ceremony, initiations, and more.  At an altitude of 7,970 ft it is nestled in the Andes Mountains.  It sits on a mountain saddle, resting in a forest of clouds and is breathtakingly beautiful.

The art and mystery of the Inca people shows itself in the stones.  Altars and carved rocks are aligned perfectly with the changing seasons and the surrounding mountains.  Doorways and windows are arranged in rows, also precisely aligned.  The stones are so perfectly fit together that there is no mortar and a thin piece of paper could not even be fit between them.

How did they do this work?  Rocks on the mountain are not from the mountain itself, but came from mountains far away … large rocks that would be very difficult for even a group of people to move.

And so the mystery remains.  Were there perhaps supernatural or alien races that helped create this special place?

Whoever they were, wherever they came from, the Inca people did have something special about them.  They brought together and united people throughout Peru.  Within just a few hundred years they had built beautiful cities of stone, golden altars, a path or roadway known as the “Inca Trail” between their cities, and so much more.

As with all Sacred Sites, only you can discover what Machu Picchu is to you.  Each person has their unique connection to this sacred place of power.  Is Machu Picchu calling to you?  Do you feel the pull to discover her mysteries?