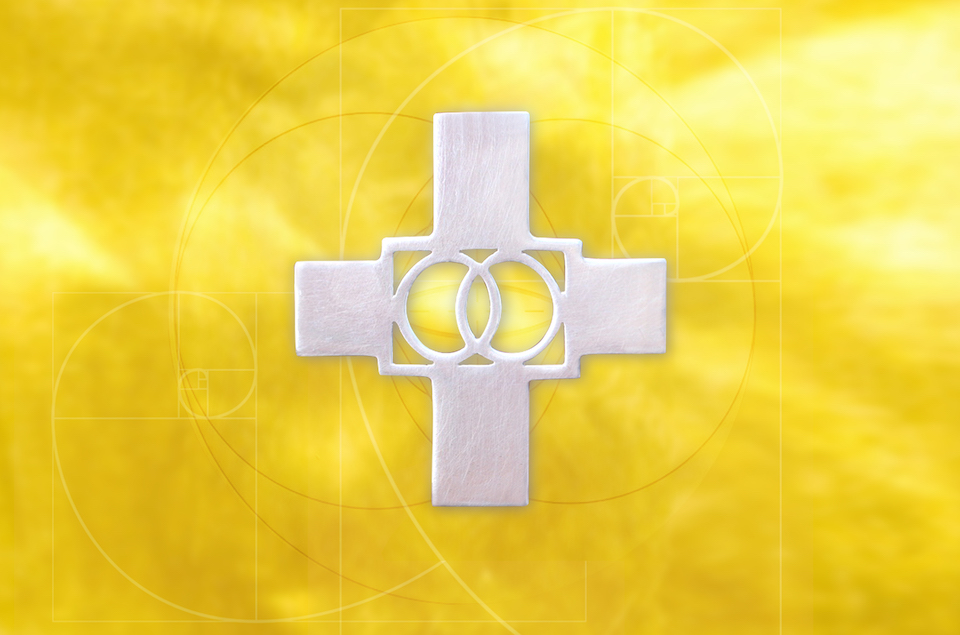 A cross of the Sacred Union – A cross of Perfect Balance.

The Aquarian Cross represents the law of One and the Christ consciousness – sacred union of the masculine and feminine.

This equal-armed and perfectly balanced cross with an open center incorporates the Golden Mean and Vesica Pisces symbols – the basis for all “Sacred Geometry”. Additionally, the point of overlap of the two circles represents the Pre-Christian symbol of the fish, the vulva or the proverbial “eye of the needle”- through which we must all pass sooner or later in perfect balance in order to achieve Christ Consciousness.

When one has the mystical marriage of heart and mind one walks through the eye of the needle (the little space between the two circles – the vesica pisces – the doorway – the fish – the entrance to the womb) into their own Divinity (chalice).

Virtually every medieval church in Europe uses as a standard motif, the Vesica Pisces in two dimensions. The fact many of these churches were dedicated to the Virgin Mary or to Mary Madagalene (aka the goddess) is simply part of the understanding.  Several of the churches in northern France are even located in such a manner that their points of light recreate the “lights” of the constellation Virgo; in Glastonbury, England, the site normally attributed to Avalon (the island of the Goddess).

We sell silver and gold Aquarian Cross pendants on our website.

Read more about the history of the Aquarian Cross here: http://www.wholisticworldvision.org/cross.html